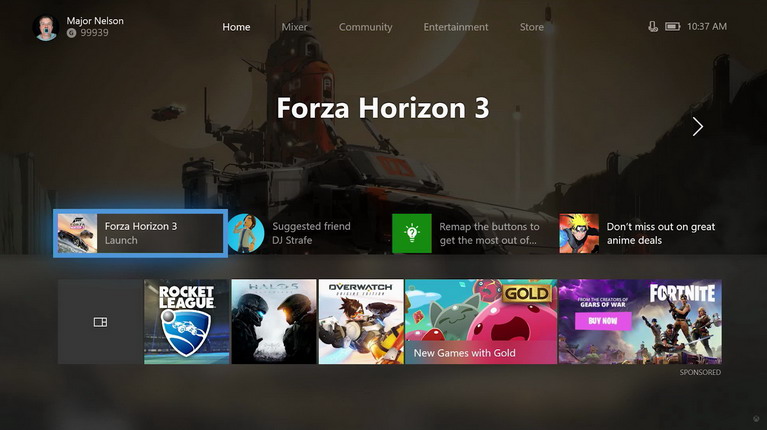 Customize Your Home: The first thing Insiders will notice is the new Home on Xbox One. This update is all about personalization; we’re putting the control in your hands, so that you can decide what to see when you turn on your console. The new look and feel is part of a design system called Microsoft Fluent Design; the look, feel, and movement of the dashboard has been updated to focus on speed, customization and expression—for you. Now, customize your Home screen to be uniquely yours, and view all the things you love at-a-glance. Have a favorite game or friend? Add them to Home! Select one, press the Menu button on your controller, and select “Add to Home.” This now creates an entire block of content that can be moved up or down—or removed altogether, should your interests or habits change. These blocks will evolve over time based on the things you like to do. For example, adding a game to your Home screen may pull in an Activity Feed post from the developer, show when your friends are playing that game online, suggest your next Achievement, and provide a quick shortcut to the Game Hub for that title. We’ll be adding additional types of content blocks in the coming months, so stay tuned for more. The team is always pushing to make the Xbox experience faster and faster. In this release, we’ve eliminated the wait between Home, Social, and My Games and Apps by consolidating them into one dashboard experience. No more splash screens means you get to fun even faster.

Effortless Guide Navigation: With this update, it’s faster than ever to switch between tabs in the guide so you can join friends, broadcast, switch between apps, and get back Home. New tab flyouts make it easier to see more content quickly, too. The new Guide layout quickly gets you to the stuff you care about, so you never miss a moment. It’s now even easier to switch between apps or get back to Home, and the new layout will enable you to quickly jump to different tabs using the left thumbstick, d-pad, or bumpers on your controller. Sign-in, Achievements, multiplayer (including parties, Looking for Group, and tournaments), People, Home and recent, messages, broadcasts and captures, and a new action center (including settings) each have their own tab in the new Guide.

A More Immersive Community: Staying connected with Friends and Clubs is now better than ever. The community section has an entirely new Activity Feed layout, showing more content at-a-glance. When looking at feed items in detail, they are presented in an immersive, full-screen view—sharing the experience just as it was captured. Reading comments is now much easier since the comment window can be expanded to fill the screen. You’ll now be able to skim the feed quickly or lean back on the couch and walk through it in detail – it’s entirely up to you. This makes it easier than ever to stay current with the games and friends you care about. Game Hubs, Profiles, and Clubs are also refreshed to make them more dynamic and engaging than ever before. We’re also making Improvements to Club discovery, to quickly display which Clubs you’re already a part of, and easily discover new Clubs to join. There will also be new titles that will be coming to Arena over the next few months, soon offering even more options for tournaments powered by Xbox Live.

Game Bar Gets Even Better: On Windows 10, we’re making it easier than ever to enable or disable Game Mode on a per-game basis by putting a switch directly in the Game bar. Mixer broadcasting with the Game bar will now give you more choices on the audio you broadcast; a new settings option will let you choose to broadcast game-only audio, or system-wide audio. We’ve also added a new Xbox Live Network Troubleshooting option to the Settings menu in Windows 10, which will help you track down connectivity issues and optimize your online multiplayer experience.