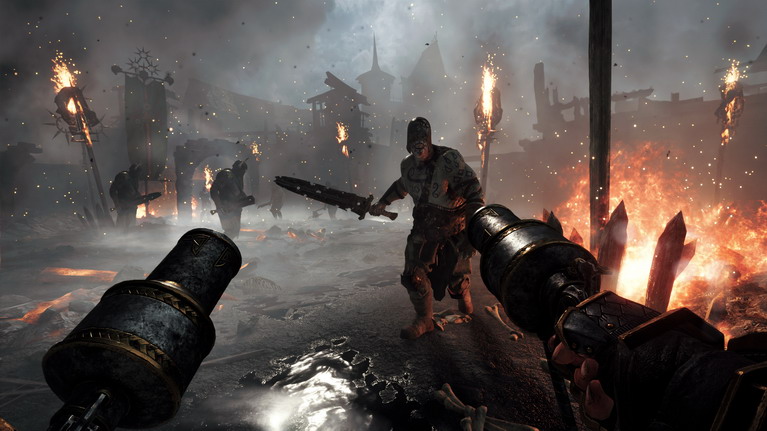 Fixes / Tweaks
Fixed so ‘Deeds’ are able to change enemy types used in patrols as well
Fixed Flamestorm Staff and Drakefire Gun triggering headshot HUD sounds
The upgrade cost of an item now matches the listed requirements
Headgear can now be salvaged
Upgrading an item with an illusion will no longer result in salvaging the item
Fixed an issue where Gatekeeper Naglfahr could transform into multiple Chaos Spawns
Added more rain to The Screaming Bell level
Fixed hole where player could fall under the bell platform on The Screaming Bell
Fixed dinner bell interaction box on Hunger In The Dark being too small to use
Fixed backtrack points out of the cellar on Fort Brachsenbrücke
Fixed issue causing some players to not get their Collector’s Edition character frames
Fixed occasion where players would be incorrectly kicked for anticheat violation
Added anti cheat panel for untrusted states to help resolving issues
When state is not trusted - or when a player has been banned, we present them with detailed information
Removed visible lines in the top and bottom of the screen caused by the outline shader
Implemented additional functionality for vote kick system to combat griefing

Kerillian - Waystalker
Rejuvenating Locus - Fixed an issue where party members would receive no healing from Rejuvenating Locus if Kerillian was above half health. Party members will heal up to half health regardless of Kerillian's current health value
Vaul's Quiver - Will now grant an amount of ammo based on your weapon’s maximum ammo. This means that a Swiftbow - with a larger ammo capacity, will receive more than a Hagbane Bow
Also fixed an issue where Vaul’s Quiver would cease to give ammo when Kerillian was above half health

Kerillian - Shade
Ereth Khial's Herald - Fixed an incorrect tooltip showing 100% bonus to Murderous Prowess instead of 75%. The talent remains unchanged, this was simply a tooltip inconsistency

Sienna Fuegonasus - Unchained
Blood Magic - To avoid self-detonation, Sienna will no longer convert received damage to overcharge while being incapacitated

Stability / Performance
Improved CPU optimizations for enemy and bot AI decision making
Fixed crash occurring when the Chaos Spawn tried to throw away a grabbed player after the rest of the team had wiped
Fixed rare crash happening when a Chaos Spawn was finished smashing a player into the ground, but that player left the game the same moment
Fixed Burblespue Halescourge who would cause a crash if a Globadier followed the players into the arena, and accidentally hurt the boss sorcerer. Bunglesnatch Humbledink then tried to retaliate against the poison cloud... Silly Blunderstunt.
Fixed a crash where a Skaven enemy tried to walk to a disabled interest point. (The interest point system handles interactions of enemies out of combat.)
Increased stability when losing contact with Steam
Fixed infrequent crashes that could occur on The Screaming Bell
Fixed crash that could occur when firing the cannon on Fort Brachsenbrücke
Fixed crash that could occur when a Warpfire Thrower hit a channeling sorcerer during the end event of Convocation of Decay
Fixed crash that could occur when a player leaves the game
Fixed crash when voting for a mission while a player vote kick is active
Decreased number of access violations during start up caused by XAudio2
Added an error message box when trying to launch DX12 binaries on any other OS than Windows 10
Game no longer uninstalls itself after a particularly rare crash

Known Issues
Backend issues with ISP UPC in Poland is still unresolved. We are working on this continually
The host can crash during the Skarrik Spinemanglr boss fight if a player joins/leaves the game
Skittergate bosses are currently in an unstable state
Localisation work is still ongoing, and we apologise for that. We’ll continue to add and improve as we patch
A crash occurs when switching ranged weapons in the HUB (with very specific timing) while playing as Kerillian Waystalker with the “Vaul’s Quiver” talent which grants ammo over time with her passive ability. (It was changed in patch 1.0.3 so that the passive triggers even at full hp (it used to trigger only below 50% hp), so it triggers from time to time in the Keep, which can cause the crash if players are switching ranged weapons often (or have bad timing) while having that Waystalker talent equipped.