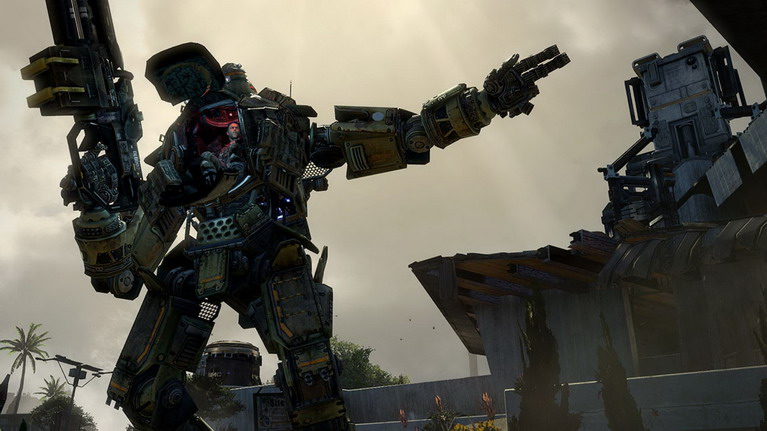 Marked For Death - A player on each team will be marked for death! Kill the enemy mark while protecting your teammate.

Titan Insignias – Want to show off your accomplishments? You can now select from a host of emblems to customize your Titan. Insignias are unlocked by completing challenges but if you've already completed the requirements, that emblem will be ready to use when the update installs. Two emblems come courtesy of Penny Arcade (thanks, PA!) and another recognizes users who completed the "Gooser" challenge the hard way.

Matchmaking - We've made improvements to matchmaking & team balancing. Now, teams are rearranged just before the level loads, to further balance the teams' skill and player counts. You'll notice that you're greyed out in the lobby until teams are set. You'll also notice "Connecting…" as players join a match.

Titan OS Voices – Players now have 3 Titan V.O. options to choose from including the classic "Betty" as well as Jeeves and Lisa.

Challenge Tracker – You can now select which challenges you want to work towards and find them easily. You can review your tracked challenges during a match by bringing up the in-game menu.

Lobby Music – The ability turn lobby music on or off.

Updated Menu Art – Menus get a new coat of digital paint with additional art. The Main Menu background movie has been updated as well.

Audio - Killing a Pilot now plays a special sound effect to the killer and unique sounds are played when killing a Pilot or Titan via Titanfall.

Rodeo - You now see the name of the Titan you rodeo.

Burn Cards – You'll notice a Triple Burn Card selector on bottom right of the HUD after you die. It's a reminder to use your cards and a convenient way to select them.

Burn Card overflow protection - To protect players who have a full Burn Card deck from losing the opportunity to earn valuable rare Burn Cards, you may now exceed your maximum deck size. However, you must discard down to a legal deck size before you arm new Burn Cards. To make this less obtrusive, the maximum base deck size has been increased from 26 to 46.

Burn Card Deck Limit tied to Gen level – Maximum deck size is increased by 6 cards per gen on top of the base 46 with a maximum of 100 for Gen 10.

Unlocks – You'll still be able to unlock the Stryder and Ogre chassis by playing Campaign, but you can also unlock them in normal MP modes. The Stryder will unlock at level 15 and the Ogre at level 30.

Win/Loss Streak – Your win/loss streak for the last 10 matches is now displayed in the lobby over the image of the next map.

Achievements – If you bought the Expedition DLC for Titanfall you have a new set of achievements to unlock by playing the DLC maps.

In this update we've made a few changes to Pilot weapons and Big Punch to ensure proper balance. Some weapons, like the Hemlok, were barely being used while other weapons were slightly overpowered. We've done another round of balancing based on feedback we've received from inside and outside of the studio. We'll continue to listen to our community in regards to weapon/game balance and thanks for sharing all of your feedback with us. Here are the changes we've made this time around:

Satchels: Satchel damage has been reduced against Pilots only. They will still kill a Pilot caught close to the center of the explosion, but the fall-off is more severe now, allowing Pilots that are far from the satchel to survive more often than they currently do.

Shotgun: The shotgun now does a little bit less damage at midrange. It was proving to be able to win fights that it should lose when at this range. We also fixed a bug where the cursor would turn red, indicating it will hit an enemy when the enemy was actually outside of the range of the shotgun's max distance.

R101: This weapon was designed to be an all-purpose weapon, and it does that quite well, too well, even. We've slightly adjusted it to make it a bit more uncomfortable to handle and hit targets at long distances. It will kick a bit more when fired but the effects are subtle enough to only be felt at long range. We've also reduced its mag size from 30 to 24. The extended ammo upgrade brings it from 24 to 30 (it used to go from 30 to 40).

R97: While it already had a higher rate of fire than the CAR, the R97 was pretty much inferior in all other ways. We've upped the RoF even higher to make it handle up-close fights better than it did. It also has the fastest time into ADS (aiming down the sights) now. The biggest change, though, is that it now does a lot more damage than it did when rodeo'ing, making it a better choice for Pilots who enjoy taking on a Titan. It is now the second best weapon to use when rodeo'ing Titans (behind only the LMG).

Hemlok: The Hemlok was one of the least popular guns in the game. Its role was intended to be the long-range assault rifle, but it wasn't doing that quite well enough. We've made it so that it is never more than 4 bullets to drop an enemy Pilot (it used to be 5 at long range). The Hemlok will also kick less when fired. The drift when ADSing has also been reduced to allow easier use against long-range targets. The silencer MOD used to take 6 hits to kill an enemy Pilot at long-range, now it is 5.

G2: The G2 now kills Pilots with 3 shots, always. It used to take 4 at range. The G2 has slightly less kick now as well. When the silencer is attached, the G2 will always kill an enemy Pilot with 4 shots whereas it used to be 5 at range. The clip size has been increased when the match trigger attachment is used to give you 12, rather than 8, rounds per magazine.

AMPed G2: The Amped G2 will always kill an enemy Pilot with 2 shots now. It used to take 3 at a distance.

Titan Plasma Railgun: The FOV, while ADSing, has been pulled back some to allow players to keep more of their surroundings in focus. This makes it easier to maintain your "charge" while tracking enemy targets.

Big Punch: We've taken a look at complaints about the Big Punch kit, and decided to adjust it. Big Punch was especially problematic when an Ogre was dealing the punch. It did enough damage to destroy the shields of a Stryder and still do a chunk of damage to the Stryder's permanent health. Spamming Big Punch as an Ogre also let it travel around at speeds higher than intended. As such, we've decided to weaken Big Punch's effects significantly when taken as an Ogre. The Atlas and Stryder didn't need as large of a change, so we've only made small adjustments to Big Punch's effect when applied to the Atlas and Stryder chassis.