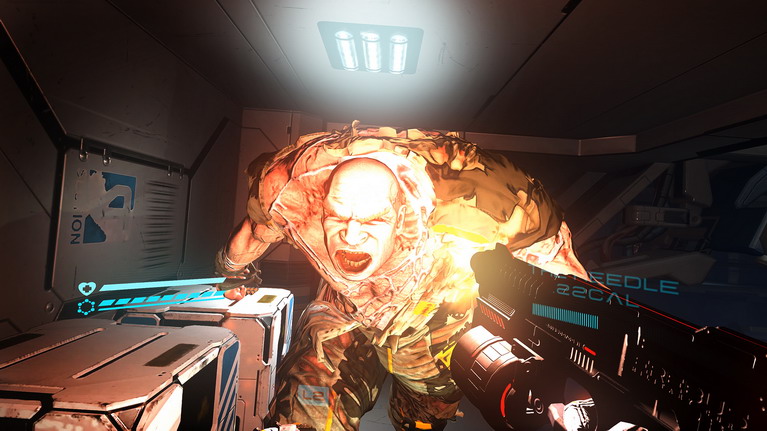 GLASS CANNON
A new challenge mode, which proved really popular at EGX last month, where it was first shown. The player must make their way through 24 increasingly difficult rooms to get to an escape pod at the far end of the Deck. They select a gun at the start of each attempt, which comes with infinite ammo – however the player only has 1 hit point, and there are no health pickups! Each time they enter a room the doors lock and the mutants attack. The game is against the clock, how quickly can they get to the escape pod?

CAMPAIGN+
In Campaign+ the player begins with all the gear and upgrades from their previous Campaign playthrough, but they are now faced with a hardcore difficulty mode. The rules of the game have been tweaked, the player no longer has SuperSense, and a Bloodhound pursues the player from the start. There are new character upgrade levels, and ‘Platinum’ rarity gear items to give the player a fighting chance.

PERMADEATH
Is it possible to complete The Persistence in a single life? In this mode once the player dies, that’s it. In order to allow the player to upgrade their character, the Deck Porters in this mode allow them to travel between all Decks, and Recovery, to quickly upgrade and buy gear.

ASSIST MODE
Assist Mode can be turned on in the Pause Menu at any time, in any mode or playthrough. It allows the player to fine tune the game’s difficulty to help get through parts of the game that are proving too challenging.
- Game speed. Slows down the game speed to assist players with less ability to react quickly.
- Damage. Reduce the damage taken to help survive longer.
- Infinite teleport. Get around more quickly with less reliance on the Sticks.
- Infinite ammo. Ideal for players with less ability to aim with their head.
- All enemies 'tagged'. See enemies through walls at all times, to reduce the need for quick reactions.
- Auto shield. Automatically deploy the shield reducing the need for fast twitch reactions.