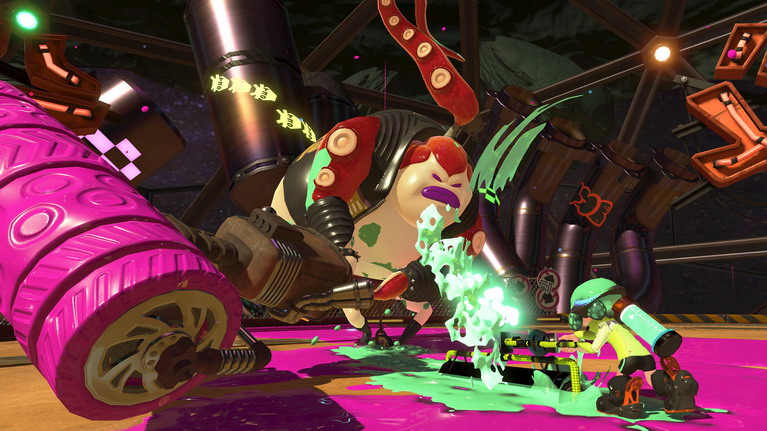 Changes to Salmon Run
Changes made to the Sting Ray and Splashdown specials for multiplayer also apply to their use in Salmon Run.
Bombs thrown by the Steelhead will no longer land on top of Flyfish or Scrappers.
Fixed an issue causing no damage to be dealt to Steel Eels hit with a Sting Ray if the Sting Ray’s shot inked any portion of the Steel Eel other than the pilot even slightly.
Fixed an issue preventing damage from being dealt to a Griller hit with a Sting Ray attempting to hit its weak point by shooting through it. Sting Rays that only hit the main body of a Griller will now also deal some damage.
Fixed an issue causing Steelheads that appeared in specific locations of the Lost Outpost stage not to attack.
Fixed an issue where two players attempting to pick up a single Golden Egg just prior to the end of a wave caused one of them to be unable to pick up any Golden Eggs during the following wave.
Fixed an issue where after playing Salmon Run online, players from your session who appeared in Inkopolis Square were always equipped with the Splattershot Jr.
Fixed an issue where players who disconnected just prior to starting a round of play would appear to be holding a Rainmaker-like weapon.
Fixed an issue causing the location of the arrow indicating the player’s character as well as their title to be incorrect on the result screen when other players disconnected just prior to the end of a round of play.
Fixed an issue causing players using Roller-type weapons to get a communications error after holding the inking button for an extended period.

Other Changes
When talking to Murch, a player’s current money and Super Sea Snails will now be displayed in the upper right portion of the screen.
Fixed an issue in Ranked Battle where teammates disconnecting while your Rank Meter was empty would mistakenly cause it to appear to be cracked.
Fixed an issue causing certain gear, such as the Splatfest Tee to be ranked incorrectly when sorting gear by “Most used”.
Fixed an issue where no damage was dealt when slowly rolling into the dummies when testing the Baller special.