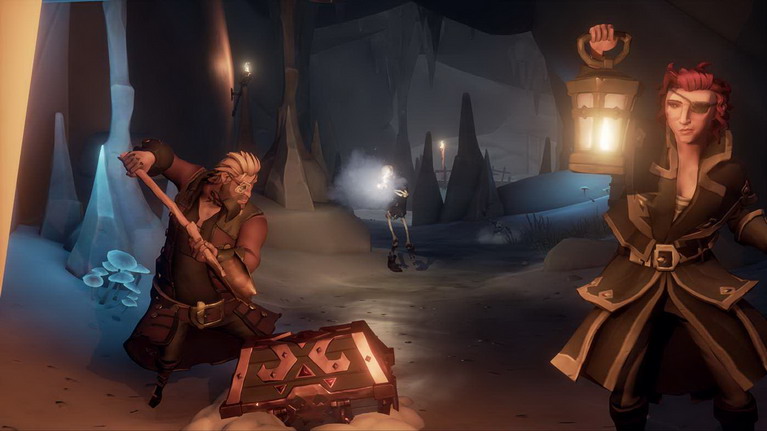 Updates
New Message from Beyond - The Ferryman was unhappy with the text that had been written describing how to 'Scuttle' a ship, so he made them write a better version - and then walk the plank.
Reload! - Adjusted position of the Ammo Crates on both ships, so they are easier to interact with.
Play the next song! - Players will no longer play the same shanty twice in a row.
UI Improvements - Images in the Vanity & Clothing Chests now load gracefully when browsing. In addition all UI screens now fade in when opened - Fancy!

Fixed Issues
Resolved issues where Skeleton Fort or Bounty Quest Skeletons failed to spawn correctly.
We have been resolving these spawning issues across the last 2 updates (1.0.3, 1.0.4), however with this update (1.0.5) we have now resolved all known reported spawning issues. If you find any further problem islands, please log a Support Ticket noting the island and we will investigate further.
Players will no longer be stuck with a single weapon slot and players weapon choice will now also persist across sessions.
Players who were experiencing the Single Weapon Slot issue will now be resolved as soon as they load into game. No more early visits to the Ferryman required!
Ships will no longer ping up into the sky when sinking.
In loving memory of the sky ships. This was our favourite!
[PC] Push to talk option will no longer reset to default (disabled) between sessions.
"You Can Always Trust The Untrustworthy" achievement can now be unlocked.
Kraken is no longer able to spawn around rocks.
Kraken tentacle should always be visible when holding a player.
Pocket watch should no longer display as closed when being shown to another player.
Skeletons and animals should no longer despawn when players climb in and out of the cannon.
Rogue Sea Dog Trousers and Royal Sovereign Trousers should now unlock when the requirements are met.
Lore Item descriptions are now localised.
Reduced popping of UI in Quick Menu.
It is no longer possible to clip through the ship when jumping on the Banana Barrel.
Wrong company icon is no longer incorrectly displayed for a split second if user is trying to get XP from 2 different companies.
It is no longer possible to drop behind the bar and get stuck in the Pirate Hideout.
Updates to incorrect NPC dialogue lines.
Getting into a cannon then getting back out should no longer skip the Tutorial.
Players just outside the inky murk will now hear Kraken fight audio when it attacks other ships.
Resolved issue where players could hear repeating audio SFX.
Resolved issue where Gunpowder kegs could spawn outside of player reach.