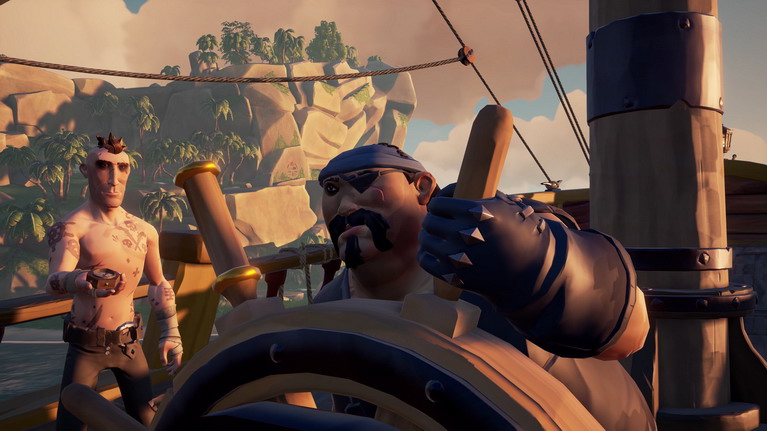 Pirate Legend
The first legendary ship customisations have arrived at the Shipwright's Shop in the Legendary Hideout! From here you can purchase your new Pirate Legend sails, hull and figurehead.

Sound Effects
Players will now hear a new sound effect when they open a Lore Book and when a Merchant Alliance contract has expired.

Spring Cleaning
It is now easier to place chests and skulls on shelves in the Captain's Cabin, and to drop items overboard!

Controller Remapping
We've added push-to-talk to the list of actions players can rebind on controller.

Fixed Issues
The server migration-free zone around the Skeleton Forts has been doubled.
Trading companies now inform you when you have reached the voyage purchase limit for the day (Refreshes at 6am in-game time).
Fixed clipping of reward values in wallet UI animations.
Fixed text clipping in the Reputation menu UI.
Company icons in the voyage pop-up UI are now the correct size.
Ammo box on Lookout Point can now be used.
Skeleton crews encountered during bounty quests and skeleton forts now have correctly matching attire.
Players weapon selection from the Armoury should no longer reset to default after death.
A notification should now trigger when a crewmate finds a reward from a Message in a Bottle map.
Ships should no longer spawn with damage.
Voyage description text has been increased in size, and should now be easier to read from a distance.
Filters in the Equipment Chest will no longer become impossible to select.
Candles are no longer floating in the air on Old Salts Atoll
Lantern in the north-western part of Kraken’s Fall is no longer floating above the barrels.
Skeleton Fort Cannons can once again be manned by players without fear of an explosive demise.
Appearance of the water in the Legend Hideout has been improved.
Rain will no longer appear inside the Legend Hideout Tunnel.
Players will now correctly take damage from gunpowder kegs whilst underwater.
Multiple text bugs and NPC dialogue issues in English have been resolved.

Performance Improvements
Improved performance on high resolution PCs running at lower than native resolution.
The number of instances of rubber banding and teleporting players has been reduced.
Increased quality of island rendering at a distance when using the spyglass on all quality settings on both platforms.
This has no effect when the island is too far away to be loaded
Multiple server crash fixes.