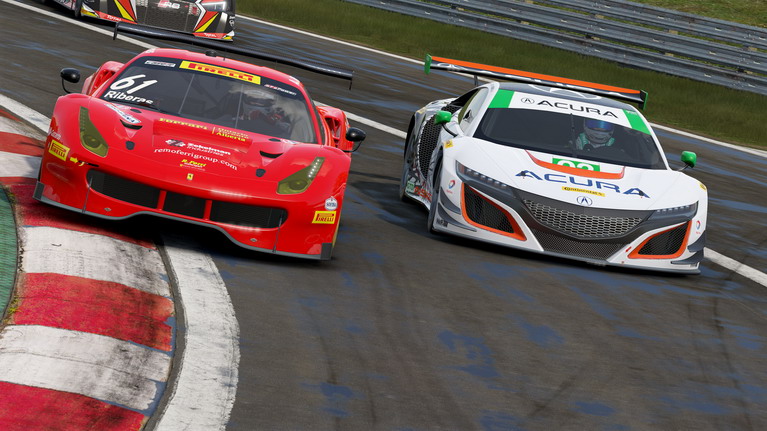 Online/Multiplayer
New game mode - The Online Championship game mode is now available, allowing players to compete online in full championships, spanning multiple rounds.
Fixed an exploit where some players could load custom setups in Community Events when Default Setups are enabled.
Improved logging and syncing when joining online games already in progress.
Fix for an online issue where players would be shown an incorrect error message when attempting to join a game session which was full.
Online Reputation: When being kicked from a race, the system now checks your recent history to help decide if points should be deducted from your ranking score.
Online Reputation: Fixed a bug where remaining players would not score for a win against disconnected players.
Resolved a problem where a previously kicked player, joining back into a game after accepting an invite, would be auto-kicked.
For players joining an active qualifying or practice session, there is now a 3-minute cut-off as the session approaches completion, after which it will no longer be possible to join the session.
An error message is now displayed when an incorrect password is entered when joining a password-protected lobby.

Career
New Invitational Event - McLaren 720S VIP Challenge.
Fix for career multi-class races, so that the finish position within the class is used for series progression, rather than the overall race position.
Nissan Skyline Silhouette, Nissan Skyline BNR32, Nissan R89C, and Porsche 961 can now be used in Career mode.
Fix for an issue where pop-ups for unlocking Invitational events were displayed in the wrong location.

VR
Improvements to the VR-specific replay camera system.
Fix for screen dirt and rain drops not rendering correctly in VR.
Fix for an issue when VR combined with NVIDIA Surround caused the game to attempt display of ultra-widescreen content in the VR headset.
Changed the VR Gaze pointer behaviour to also hide when the UI is disabled in Photo Mode and Replays.
Fix for VR Photo Mode initial FOV settings when switching camera mode.
Fix for screenshots taken in VR Photo Mode not saving correctly to the

GUI and HUD improvements
Session information such as race duration is now displayed on the pre-race menu.
Changed the HUD colouring scale for race rain tyres.
Added a dialog to show replay saving progress.
Change to the way the Start Type is displayed on the Round dialog so that it matches the Race Settings dialog.
Fix for an issue where a menu would become disabled when moving 'down' from the bottom of the menu.
Updates to various buttons to better indicate when a button is selected/highlighted.
Fix for buttons on online post-race results screen so that they only show when they can be pressed.
Fixed cases where the RPM Gauge on the HUD was not matching the actual RPM of the car.
Fixed loading bar to become invisible when local loading is complete.
Added new Help Text for Menu Spring Strength in FFB settings.
Added fuel estimation to Tuning Setup screen and ICM.
Added auto-scroll to a number of info feeds to prevent overlapping text.
Added the name of the car setup currently in use to the 'Setup' button on the Pre-Race screen.
Fix for fuel being displayed incorrectly as mass, not volume.
Improvements to the lap timing and visual-split timing HUD widgets.
Fix for incorrect number of records being counted on Community Event screen.
Fixed an issue in Time Trial where Loaded Ghosts and Options on the Pre-Race menu were highlighted at the same time if the player added multiple ghosts in Time Trial.
Fixed an issue where an incorrect weather forecast icon is displayed for the client in the lobby details screen.

AI
Improved AI in low- and high-speed cornering.
Improved balance between player and AI in wet conditions.
Improvements to general AI behaviour and racecraft across all tracks.
Tweaks to how AI are affected by snow and ice.
Improvements to the AI driving on slick tyres in wet weather.
AI Practice and Qualifying grip levels rebalanced to better match expected behaviour.
Better balanced AI speed on corner exit.
Generally improved the AI racing balance and ability across many tracks.

Other Improvements
Fixed an issue in Time Trial where the player could load a ghost’s setup for a different car from the player’s car if the selected ghost was in the same class as the player’s car.
Improved the rendering of the edges of LiveTrack puddles for off-road/off-track areas.
Fixed an issue with mud and dust particles being visible inside cockpits.
Improvements to the wet track darkening render effect.
Much-improved motion blur and bokeh effects.
Fix for an issue where, in certain cases, LiveTrack conditions could be carried over from one game type to another.
Improved the synchronisation of clouds and rainfall, and the effects on cars.
Fix for a red/yellow graphical glitch sometimes appearing on track surface.
Fix for an occasional crash when switching shadow detail level.
Fixed an intermittent crash when entering text for a new pit strategy.
Fixed an issue where occasionally some AI cars would not move on the first viewing of a replay.
Fix for an issue that would reset the player’s tuning setup to default when Pausing and choosing to return to pits.
...and many other small tweaks, improvements and performance enhancements.