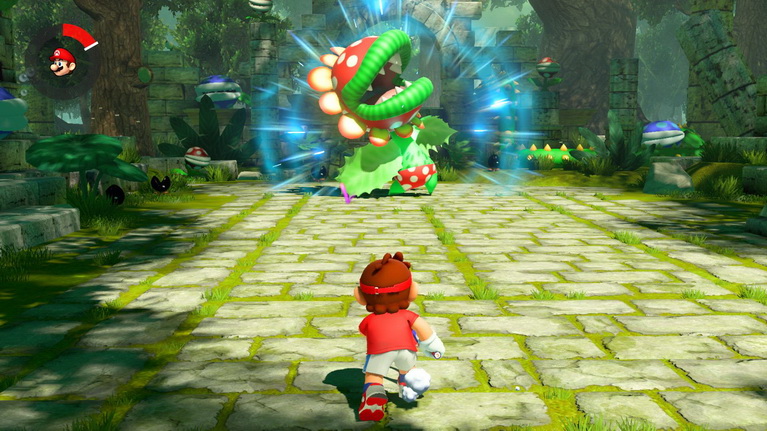 Game Balance Updates
We have increased the minimum energy level used for a Zone Shot serve from 25% to 30%. 33% energy is still needed in order to trigger the shot.
We have shortened the distance a character is pushed back when returning a shot that pushes the opponent to the back of the court, such as a Max Charge Shot.
The player can reduce the impact of being pushed back by returning a Topspin and Lob with a Slice, a Slice with a Topspin, and a Flat with a Flat.
We have adjusted the way the ball bounces back when hitting the center mast on the Savage Sea court.

Additional Settings
Options: Players can now switch the controls of Trick Shots to use only the Right Stick.
When holding the Joy-Con sideways, you can complete a Trick Shot by pressing up on the directional buttons (or the Y button) twice, regardless of the settings.
Free Play: You can now choose Stadium Only when entering search conditions when searching for players online via Invite Anyone.
We have added Full (6-game, 1-set match) to Free Play and Swing Mode.

Fixes to Online Tournament Ratings
Your rating will no longer go up when you lose a match.
When you win a match, your rating will not go down, and when you lose a match, your rating will not go up. Your rating will change based on the result of the match, but the amount it changes will be based on your opponent’s rating and on the content of the match. (The change may also be zero.)
If the software is forcibly closed during a match, your number of losses will increase, and your rating will go down by 0.5%.
If multiple intentional disconnections are detected, they may not be reflected in your ranking.
Starting with the August 2018 tournament, the ability to sort by rating will be added to the ranking board.
Along with this, the ranking board for total accumulated points will no longer display rating. You will be able to check your own rating for the month of July by looking at Results on the left-hand side of the tournament display.
At the start of each new month, your starting rating will change based on results from play the previous month. (This will be reflected as of the change from July to August.)
Rating of 2,000 or less - starts at 2,000
Rating between 2,000 and 2,500 - rating stays the same
Rating above 2,500 - 1/10th of the amount over 2,500 will be added to 2,500 to determine the rating
Note: If you did not play the previous month, or if any irregular data is discovered, your rating will be reset to 2,000.

Changes to Character Abilities
The abilities of certain characters have been changed. Click here for details

Other Changes
Fixed an issue where the “Too Early” block timing indicator would appear when you are not pressing a shot button, while using a Trick Shot to return a ball from a Zone Shot or another Special Shot.
It is possible to block the ball from a Zone Shot or another Special Shot by pressing the shot button with good timing, even when while using a Trick Shot.
Fixed an issue where it became easy to succeed at a normal block during a 1-point rally in the period between a perfectly timed Trick Shot and the next shot that was not a perfectly timed Trick Shot.
Your energy gauge will refill greatly when you hit a Trick Shot with the best timing possible.
This issue will not occur during Zone Speed or blocks performed during Trick Shots.
Fixed an issue where the energy gauge would show as yellow instead of red when your remaining energy is between 1/3rd and very little.
Fixed an issue in online tournaments where the character icon was horizontally inverted as it entered the tournament display block on the right side.
Fixed an issue where the game would stop when connectivity was especially poor during local wireless or Internet matches.
Fixed various issues related to the display of text.