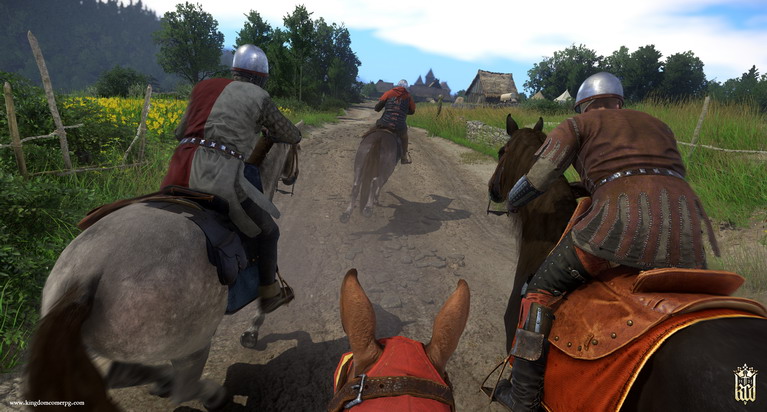 New features:
Henry can now wash away his sins by buying indulgences in churches.
Physically simulated women's clothing added.
We scattered 16 new lore books around the world.
Any forgotten or despawned quest items will now be moved to the gravedigger's chest and the player will be notified via new quest"Lost and Found".

Fixed issues:
Guards no longer drop halberds. All previously dropped halberds deleted. This should fix many performance and camera twitching issues.
Several bugs that caused abnormal CPU usage fixed. This should improve performance for many players.
Optimized lighting in battles should give the player few more FPS.
Several crashes at the beginning of the first two quests fixed.
Any remaining issues with going through doors should be fixed.
Slow loading of detailed textures after long game sessions fixed.
Archery tournament no longer causes inability to save.
Infinite fader in archery tournament will no longer appear.
Three more activities now have initial map markers.
The game now autosaves on completion of most of the quests.
The game now consistently autosaves before critical story events.
Several helmet shadows added. Should fix any odd shadows of player
Many endless faders after dialogues fixed.
NPCs now can swap weapons from melee to ranged faster.
NPCs now reacts to player aiming at them with a bow and will try to get to him faster, instead of only reacting to being shot at as previously.
NPCs being aimed at or shot at will no longer approach the player in a straight line.
A bug that prevented the player from talking to Father Godwin in Mysterious Ways fixed.
Corrupted autosave at the start of "Homecoming" quest fixed.
It is no longer possible to stealth-kill NPCs in narrow spaces without playing the animation.
Cages in the quest "A Bird in the Hand..." should no longer disappear. Any players with the quest in progress will have the quest reset.
Master Karel now correctly goes to play dice in the evenings. So the player can win all his money in "Rocketeer" quest.
Executioner Hermann no longer keeps beating the player unconscious when he is angry.
Tutorial for axe and mace master strikes fixed.
Miller Peshek can no longer get stuck in lockpicking tutorial.
It is no longer possible to lockpick Peshek's tutorial trunk before starting the tutorial, which was causing the tutorial to fail.
Novice Antonius should no longer get stuck after saving while he investigates the blood.
Talking to Antonius before passing out from poison no longer ends in infinite fader.
When the player is ambushed during fast travel he will be placed much closer to the enemies.
Parts of Rattay Rathaus are now properly locked.
Killing important NPCs during "Sheep in Wolf's Clothing" quest now properly fails the quest.
Erik now has lower RPG stats and is easier to persuade. This should make the achievement/trophy Freud easier to achieve.
The player can no longer evade some crimes by being mounted on a horse.
Knocking out Margaret during "Sheep in Wolf's Clothing" can no longer break the quest.
Killing the scouts near the mines before "The King's Silver" quest no longer causes infinite fader in that quest.
Loading the autosave from "The King's Silver" quest will no longer skip one of the cutscenes in that quest.
Final skirmish in "Robber Baron" quest no longer fails to start.
The player no longer has the option to fix the leg of one of the wounded if the wounded NPC is dead, which cause the game to freeze.
It is no longer possible to drop off the horse in "Run!" quest when the player skips the cutscene.
Encouraging Procopius to have his tooth pulled now works even when the player has "Rocketeer" quest started.
Objective now properly fails and gives more information in the journal in "The House of God" quest when the player doesn't meet Zmola at the scaffolding.
"Gallows Brothers" quest can now be properly finished even when the player steals the money in Talmberg.
Hidden places in the monastery where the player could access his horse inventory removed.
NPCs should no longer sink into terrain on collision in Rattay.
It is now always possible to knock on the bathhouse door in the "Next to Godliness " quest.
Saving the game while carrying a corpse no longer makes NPCs see the corpse even after the player drops it.
Fritz and Matthew are no longer frightened by corpses during "A Rock and a Hard Place" quest.
Any successful transaction now slightly raises reputation with traders based on the transaction amount - only up to 75 reputation.
Ambushers now carry torches at night.
The player is now officially allowed to hunt in the forest after being named Master Huntsman.
The probability of ambush by just one stronger opponent is now much higher.
It is no longer possible to kill your opponents in "Chumps" minigame without triggering crime.
There should be more chatter dialogues between NPCs about the deeds the player did.
And 200 other bugs fixed.