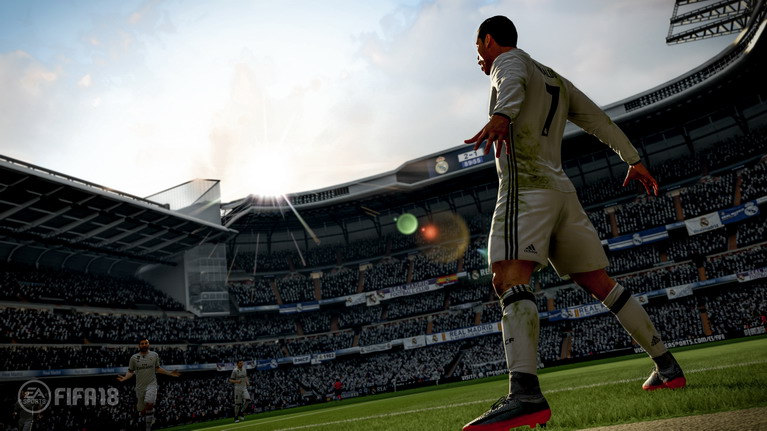 Made the following changes in Gameplay:
• Made ground passes and ground through passes less effective when blindly passing the ball between 90 and 270 degrees, where 0 degrees is the direction the player is facing.
The most significant impact will be seen when the pass angle is between 140 and 220 degrees.
The impact scales when the pass angle is between 90 (least impact) and 139 degrees and between 221 and 270 (least impact) degrees.
The passes impacted by this change will see:
Reduced ball speed.
Reduced accuracy.
• Disabled user controlled reactions, when locked to a player, when the goalkeeper is holding the ball.

Addressed the following issues in Gameplay:
• The goalkeeper sometimes parrying the ball into his own goal.
• The goalkeeper diving too early on downward header and volley shots.
• Players sometimes becoming invisible during a match.
• Dragbacks not working when rapidly tapping the modifier button.
• Players being unable to string together multiple stepovers.
• The goalkeeper, in some situations, being unable to throw the ball after making a save close to the goal line.
• The player automatically passing the ball from a set piece after the game had been paused in an Online match.
• An issue with Custom controls where movement with the directional buttons was not working when locked to a player.

Made the following changes in FIFA Ultimate team:
• Added the Objectives tile to the Pause Menu in all FUT Online modes.
• Added Guest Mode in FUT Online Seasons and FUT Online Draft.
• Disabled the FIFA Trainer within FUT Champions.

Addressed the following issues in FIFA Ultimate team:
• An issue in Squad Building Challenges where tagging a group of challenges would make it unselectable.
• ICONs displaying their current age on in-game overlays.
• Wrong badge showing for your opponent on the Online Season's Match Preview screens.
• Objective Completed visual notification not displaying correctly for some Daily/Weekly Objectives.
• Alignment of the text on Manager League items.
• An issue with the effects shown during the pack opening animation.
The icon of your rank in Squad Battles displaying incorrectly when claiming rewards.

Addressed the following issues in Career Mode:
• Players crashing during the first game of the season in certain situations.

Made the following changes in Audio / Visual / Presentation:
• Updated the Chile National Team kits and crest to be authentic.

Addressed the following issues in Audio / Visual / Presentation:
• The volume of the audio in the Cristiano Ronaldo celebration.
• Some issues with crowd flags displaying the wrong images.
• Some visual issues with the Bundesliga broadcast package.
• Situations where the ball would appear to go through the goal netting.
• An issue where a player on the ground would incorrectly animate as flipping or spinning.
• Celebrations clipping through ad boards.