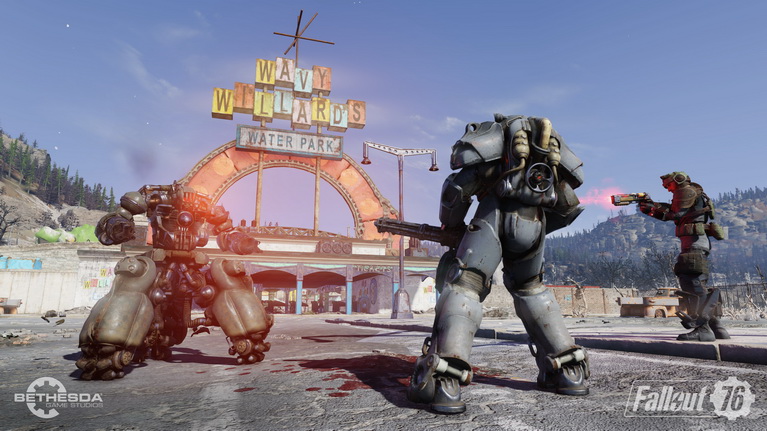 GENERAL
Performance: PC framerates are once again uncapped. However, reaching very high framerates will no longer cause movement speed to increase. This was originally fixed in the November 19 patch.
Stability: The Fallout 76 game client and servers have received additional stability improvements.

C.A.M.P., CRAFTING, AND WORKSHOPS
Stash: Maximum stash storage has been increased by 50%, to 600 pounds. This is a conservative adjustment, and we plan to increase the storage cap further in the future once we’ve verified this change does not impact the stability of the game.

BALANCE
Enemies: XP rewards for killing high-level creatures have been reduced.
Bosses: Fixed an issue affecting instanced Boss loot. Players should now correctly receive 2-4 items per boss, depending on the creature’s difficulty and level.
Weapons: Automatic weapon damage has been increased by approximately 20% across the board.

PVP
Weapon Effects: Hitting another player with a Cryolator now applies a Chilled, Frosted, or Frozen status based on how many times they are hit. The duration of movement speed reductions applied by these effects have been significantly decreased.

STABILITY AND PERFORMANCE
Console: Fixed an issue that could cause the player to encounter an infinite loading screen when signing out of their console account while playing Fallout 76.
Xbox: Addressed a crash that could occur when sending multiple team invites immediately after exiting Vault 76 to a player who is not a friend.

GENERAL
Power Armor: Fixed an issue affecting Power Armor frames that could prevent the player from exiting their Power Armor.
Nuke Silos: Flipboards inside Nuke Silos no longer display portions of launch codes too soon after the codes were reset for the week.
C.A.M.P., WORKSHOPS, AND CRAFTING
C.A.M.P.: Moving C.A.M.P. locations will now correctly move standalone items built by the player into the build menu’s Stored tab.
Workshops: On PS4, wires will no longer appear to float in mid-air when attempting connect two or more objects.
Turrets: Will no longer become invisible if the player is not present at their C.A.M.P. when their turrets are destroyed.

PERKS
Perk Cards: Ranking up a Perk Card will no longer cause a duplicate card to appear.

SOCIAL
Teams: Fixed an issue that could prevent a team from being correctly formed in a game world after creating the team on the Main Menu when both players are using new characters.
Teams: Display durations for social notification have been reduced when many notifications are pending. This should help address an issue in which players did not see that they successfully joined a team.

USER INTERFACE
AFK: Players will now be disconnected from a game world after 10 minutes of inactivity and will be prompted with a timer 1 minute before being kicked.
Atomic Shop: On PC, cursor position will no longer be disjointed from clicks in the Atomic Shop while using 16:10 resolutions.
Enemies: Red crosshairs and enemy health bars will no longer persist on-screen when an enemy is no longer in view.
Localization: Subtitles will now appear correctly, and English voiceover will play, for game clients in languages that do not have their own localized voiceover when listening to a Holotape or interacting with robots.
Pip-Boy: Fixed an issue that could cause duplicate data to appear in the Pip-Boy’s Stat and Effects interfaces.
Respawn: Dying while severely overencumbered will no longer remove all map markers when attempting to respawn. Instead, the player can now respawn at the nearest discovered Map Marker.
Quest Tracker: Quest objective notifications will no longer appear for inactive Quests immediately upon connecting to a world.