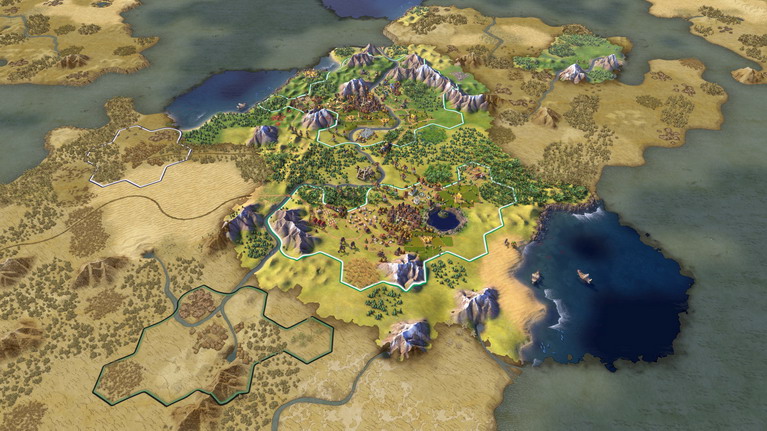 BALANCE CHANGES
• Harbors now give a major adjacency bonus with the City Center, +1 Food to all Coast tiles when the Lighthouse is built, and +2 Gold to all Coast tiles when the Seaport is built.
• Australia now gets +1 for Charming/+3 for Breathtaking on the four affected districts (had been +2/+4) to compensate for the Harbor boost above
• Royal Navy Dockyard now always provides +1 Trade Route capacity, even if the city already has a Commercial Hub. This makes it more useful, even when England builds it on its home continent.
• Added “Future Civic” to the end of the Civics Tree, a repeatable Civic to research and add to the player score.
• Bomber units are now more effective against cities.
• Swordsman are now reduced to 36 combat strength.
• Damages now remain on City and Encampments when a city is traded.
• Siege units with bonus movement (e.g. from Great Generals or Persian surprise war) can still shoot after moving as long as they still have 2 MP.
• Adjusted Warmonger penalties for Diplomatic status:
o When applying a warmonger diplomatic penalty for EITHER declaring war or capturing a city, reduce that penalty if you are enemies with the target of that warmongering as follows:
-20% warmongering if this is against a player you have denounced
-40% warmongering if this is against a player you are at war with
o NOTE: This is not used in situations where you are fighting a Joint War against the target power or when Sumeria joins as ally in war (in both those cases the penalty is still zero).
o EXAMPLE: Macedon is at war with Persia. If India goes to war with Persia sometime in the middle of this Macedonian/Persian War and captures a Persian city, Macedon will reduce its warmonger penalty against India by 40%.
• Adjusted Warmonger penalties for City Population:
o When applying a warmonger diplomatic penalty for capturing a city, reduce that penalty if the city is smaller than the average city in the game as follows:
If the city’s population after conquest is below the average population of all the cities in the game, reduce the warmonger penalty by the percentage that city’s population is below the average.
o EXAMPLE: Persepolis is conquered and its population after conquest is 6. But the average size of a city in the game is 8. So this city is 2 / 8 = 25% below the size of the average city in the game. Therefore the warmonger penalty is reduced by 25%.

AI TUNING
• Improved coordination for multiple attacking units.
• Ranged units better understand how to capture civilian units.
• AI should now generally accept embassies when neutral, and reject when unfriendly.
• When asking an AI to equalize a deal that has elements on both sides of the deal, it will consider a gold-only change before looking at other possibilities.
• Increased AI’s desire to repair pillaged Districts and Buildings.
• Minor civs will no longer go after policies that give them extra influence they can never use.
• Made it easier to meet the positive side of the environmentalist agenda
• AI will now build multiple Neighborhoods.

BUG FIXES
• The Great Works tooltip in the deal now shows extended information.
• Melee units can no longer attack embarked units.
• Pillaged improvements no longer provide Pantheon bonuses.
• Fixed double-counting of Appeal from Improvements.
• Fixed broken gossip message about Seaside Resorts that made them always mention a "lost city".
• John Curtin is now referred to as “Prime Minister” and not “President” in the Outback Tycoon scenario.
• Fixed an issue where previously constructed buildings were not showing up properly on the Production Chooser.
• The World Tracker now keeps its open/closed state between turns.
• Additional bug fixes.

ADDITONAL CONTENT
• In Game
o Fixed issues in the Additional Content menu with mods that contained very long strings.
o The "ImportFiles" modding action now works as a Frontend action.
o The "UpdateIcons" action now supports SQL files in addition to XML files.
o Multiple files can now be specified in the "AddGameplayScripts" Ingame action.
o Added a "DoNothing" Frontend action and Ingame action. This action is useful as a placeholder or as a container that includes other actions.
o The localization database is now written out to the cache folder.
• Development Tools
o The SDK launcher will now close after the user has clicked on an application to launch.
o ModBuddy will no longer display a 'Parameter "escapedValue" cannot be null.' error when the Development Assets are not installed.
o Added SQL syntax coloring to ModBuddy.