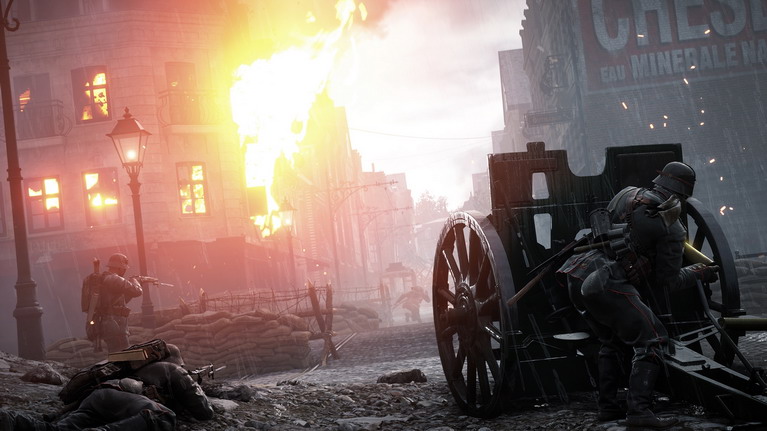 Participate in these Operations and your end of round score will be applied toward the progress of unlocking a Battlepack reward. PTFO to maximize your score, but be sure to stick around until the end of the match to have it applied toward your progress. Try to unlock as many rewards as you can before the active campaign expires.

NIVELLE NIGHTS
Just over 100 years ago, the French Battle of La Malmaison took place in the foggy, cold night of October 23, 1917. Now, every Battlefield 1 player can join the fight for the heavily fortified Chemin des Dames ridge, in the Nivelle Nights map. Battlefield 1 Premium Pass and Battlefield 1 They Shall Not Pass owners have been enjoying this map since its release, and we’re thrilled to announce that it’s available now to all Battlefield 1 players.

HDR
Battlefield 1 is now compatible with Dolby’s High Dynamic Range standard. With a compatible graphics card and TV, you can enjoy Battlefield 1 mastered for Dolby Vision HDR colors and brightness.

PLAYER PROGRESSION
Players are now able to track all five active Medals at the same time.
New weapon skins coming to a Battlepack near you!

UI & HUD
Fixed an issue that caused in-game player icons to become transparent.
Fixed an issue where some players found themselves stuck on the globe screen.
Possible fix for an issue where players occasionally experienced a red tint when taking damage, regardless of health status.
Removed the HUD of a multiplayer feature, Specializations, from appearing in single player and hardcore experiences.
Fixed an issue where the supply drop icon would render multiple times on the Table Top view, in Spectator mode.
Improved the Gamepad Control Schemes options screen, to display when there are more than two actions mapped to a single button.
Fixed an issue where weapons and gadgets would sometimes show older icons when button mappings/key bindings were changed.
Fixed key binding issue when using the 305/52 O Coastal Gun.
Removed duplicate AT Grenade icon from Elite Class Weapons & Gadgets.
Addressed an issue with a missing ammo counter while on a horse.
Fixed an alignment issue in the netgraph UI.

WEAPONS, VEHICLES, & GADGETS
If resupplied, the Scout class now has the ability to place a second tripwire of each type (i.e. gas, incendiary, bomb HE), without cancelling the first.
Fixed an issue where throwing certain gadgets onto vehicles could result in uncharacteristically large impact sounds.
Added the Mosin Nagant M91 as the standard issue rifle for the Russian and Bolshevik factions in custom games.
Fixed an issue where auto-reload would sometimes add an extra bullet in the chamber on some weapons.
Adjusted the brightness of smoke and muzzle flashes on semi-auto rifles.
Fixed an issue that was prohibiting grenades from being replenished with an ammo pouch/crate.
Fixed an issue where some players could activate the speed boost in air planes without unlocking the ability first.

MAPS & MODES
Fixed issue with supply drops landing on Galicia bridge negatively affecting players.
Adjusted the Red Tide Operation layout in Volga River, providing more options of approach for attackers.
Improved Conquest layout, spawns, and capture zones on Brusilov Keep for better balance.
Removed Elite pickups from Team Deathmatch in Argonne Forest.
Fixed an issue where players experienced the inability to unmount the FK.96 Field Gun in Argonne Forest.
Fixed an issue that caused Mother’s voice to cutoff while transitioning to 2nd map in the Red Tide Operation.
Improved an issue where the globe would sometimes display when transitioning between maps in an Operation.

GENERAL
When deploying on a squadmate and the squadmate dies while the camera is transitioning, the deploy will now be cancelled and player will return to deploy screen.
When deploying directly into gas the gasmask will now automatically activate.
When deploying directly into the air the parachute will now automatically activate.
Fixed an intermittent issue where players could become invisible.
Reduced the camera shake when taking damage.
Addressed an issue that caused servers to reset when playing Operations, resulting in players returning to the frontend with a “Server is under maintenance” message.
Fixed an issue that prohibited players from spawning with various weapons and vehicles in pre-round.
Fixed an issue where a Squad Leader promotion count down occurred during the end of round screens.
Fixed an issue that reset Vsync refresh rates to the desktop refresh rate.