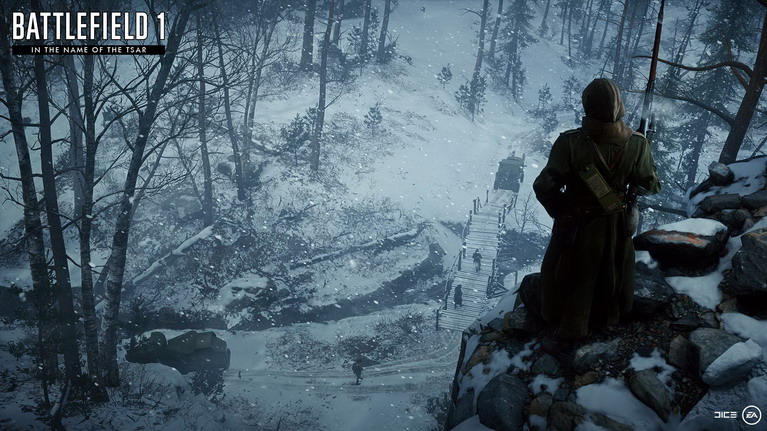 Battlefield 1 - In the Name of the Tsar update

SERVICE ASSIGNMENTS AND SPECIALIZATIONS
Prepare for battle like never before with the Specialization system. New customization options will allow you to enhance your effectiveness on the battlefield and tweak your soldier to explore new ways to play. All players will start with a set of basic Specializations and many more can be unlocked by completing Service Assignments. Service Assignments are a new set of challenges that will test your mettle as a soldier. Show that you’ve got what it takes with the “Getting Started” assignments before moving on to the more difficult “Staying Focused” challenges. Will you pick one kit and master it, or complete them all and become a jack of all trades?

HDR10 SUPPORT
Added support for HDR10. With HDR (High Dynamic Range), the visuals of Battlefield 1 will be even more breathtaking for owners of the required tech (a screen with HDR support together with a console/PC with HDR capabilities.) HDR expands the contrast ratio and color palette to offer more realistic, immersive, and natural visuals.

PERSISTENCE
Fixed issue where the Origin Access dog tag was not being unlocked when subscribed to Origin Access.
Added Service Assignments and Specializations.

UI
Fixed issue where the wrong rank icon was displayed on the Kill Card for Rank 110.
Fixed issue where some weapons were not being fully customizable from the front end.
Replaced shortcuts on Home Screen with dynamic Battlepacks and Service Assignments widgets.
The name filter now trims empty filter texts in the Server Browser.
Game servers with custom configuration are now designated as CUSTOM in the Server Browser.
Fixed issue accessing Options menu after leaving the server queue.
Fixed an issue in the End of Round screen where all Class Rank icons were gold instead of the corresponding Gold, Silver, or Bronze Rank value.

VEHICLES
Bombers should no longer take multiple damage pings from a single bullet.
Changes to stationary weapon repair and respawn - if not repaired for two minutes, the QF1 AA, FK96 Field Gun, and 305/52 O Coastal Gun will be restored to full health. Players can still use a repair tool to get them back into action faster.
Fixed issue where dismounting a horse while it was jumping would cause it to get stuck in the jump animation.

WEAPONS & GADGETS
Fixed issue where it was possible to spawn with duplicate gadgets.

MAPS & MODES
Fixed collision on staircase in Fort de Vaux to allow players to climb them while prone.
The Best Squad screen will now appear after an operation is completed.
Fixed issue where character models would appear blurry in the Best Squad screen.
Improved loading of the Customize Soldier screen on the main menu.
Fixed issue where the kill card would sometimes not show while spectating other players.